In Supremacy 1914 managing, upgrading and conquering provinces will lead you to victory. Provinces determine the expansion of your nation, are the main sites of production and the scene for great battles. In order to maximize your efficiency you will have to keep a close eye on your provinces' production and morale.

The province bar on the bottom of the screen informs you about all relevant properties of the currently selected own (or enemy) province.

This information includes the province's owner, the current morale of its population, the resources and tax income from that province, all buildings in that province as well as current constructions and productions. 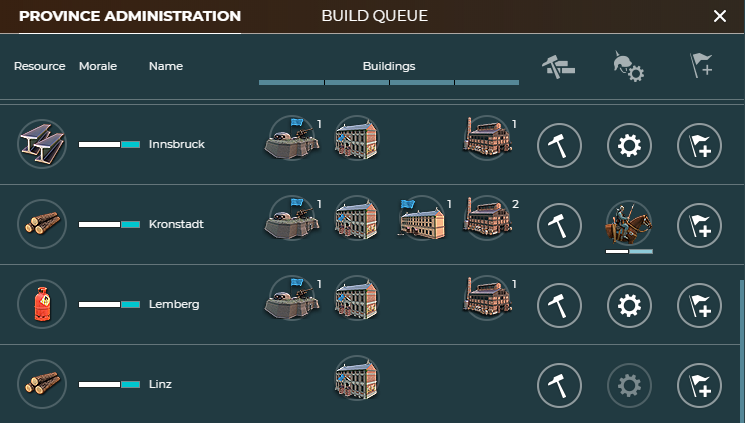 Disabling/enabling buildings: It will often make sense to disable unused buildings to save their upkeep costs. To switch buildings on or off click on the building icon in the province bar or province administration.

Multi-selecting provinces: If you want to start the same production or construction in more than one province, you can select multiple provinces in the province administration (1) by holding CTRL and clicking the designated provinces or (2) by drawing the cursor over them. (Hint: Selecting multiple provinces using the CTRL key works on the map itself, too.)

Province morale overview: The province administration gives you a quick overview of your province's morale. Low morale can have a number of negative effects on your provinces' buildings and productions.

Morale is a percentage-based value representing the overall loyality and productivity of your provinces. You should always keep an eye on province morale as shown in the bottom left of the province bar. Province morale is recalculated once per day at day change and depends (among others) on the following factors: 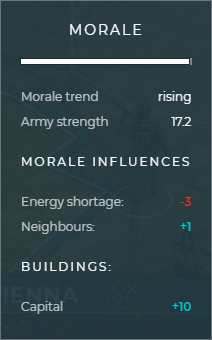 As mentioned, the morale of a province directly effects the province's resource production. If morale is low, the province will just produce a fraction of the possible resources: One single-resource province with at least 90% morale produces 3,150 tons a day. If morale drops under 90%, the production fades continuously and is reduced to half when the morale drops to 30%, below that it keeps decreasing even further.

In addition, provinces with low morale (less than 30%) have a high risk of revolts. Revolts damage or kill garrison troops or change the owner of a province. You can prevent revolting by positioning a sufficient number of garrison troops in the province center. Revolt risk is displayed in morale tooltip of the province bar.

Hint: If you find your province morale dropping for no apparent reason, a hostile spy might be the cause. He may have either reduced the morale directly or may have sabotaged the production of resources, which causes a drop of morale if the demand cannot be met anymore (see "Espionage").

Hint: You can toggle the morale view in the game round settings on the top right to receive a quick overview about morale levels in your provinces.

You can always use Goldmark to instantly boost province morale (10% for 500 Goldmark). This in turn directly effects the province's productivity and reduces the risk of revolts. However, once raise, province morale will again fall at day change if the calculated maximum province morale is lower than the current one.

If you conquer a province, you’ll receive the whole daily production of that province and a part of the tax income. Conquering a province will also reduce its morale to 25%, making revolts very likely.

One notable exception to this rule is 're-conquering' provinces: As long as the new owner of a captured province does not increase its morale to more than 80%, the previous owner will have the chance to re-conquer the lost province. If the province had more than 80% morale under the previous owner, it will automatically recover up to 75% after being re-conquered. Otherwise, the above rule applies.

If you conquer the capital of another nation you receive two special benefits: